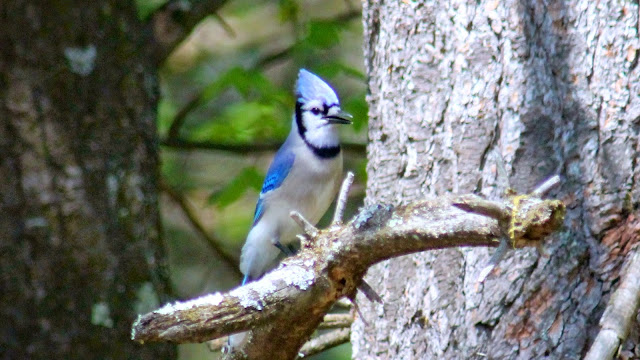 We all have an attractive friend that happens to be loud too. If they were a bird, they would a Blue Jay.  This striking blue bird is part of the Crow family, which makes sense, because some families are just louder than others.  The Blue Jay is also known for being very intelligent.  They will mimic other birds, especially hawks.

Blue Jays are very social birds that communicate with calls and body language.  They hold their striking blue crest up when aggressive.  Scientist believe they have a very tight family structure and it explains why they are usually seen in groups.

They eat a diverse diet of insects, nuts, seeds, fruits, eggs and other birds. Blue Jays will sometimes raid nests of other birds.  Their favorite food is the acorn and in the process have planted a vast  number of oak trees.

Fun facts about the Blue Jay

-Blue Jays can live to be 17 years or older in the wild.

-Blue Jays is another popular nickname for sports teams.

-Jays in captivity have been known to mimic humans.

Tell us about your experiences with the Blue Jay in the comments.

Posted by BYBirdBlog at 4:06 PM